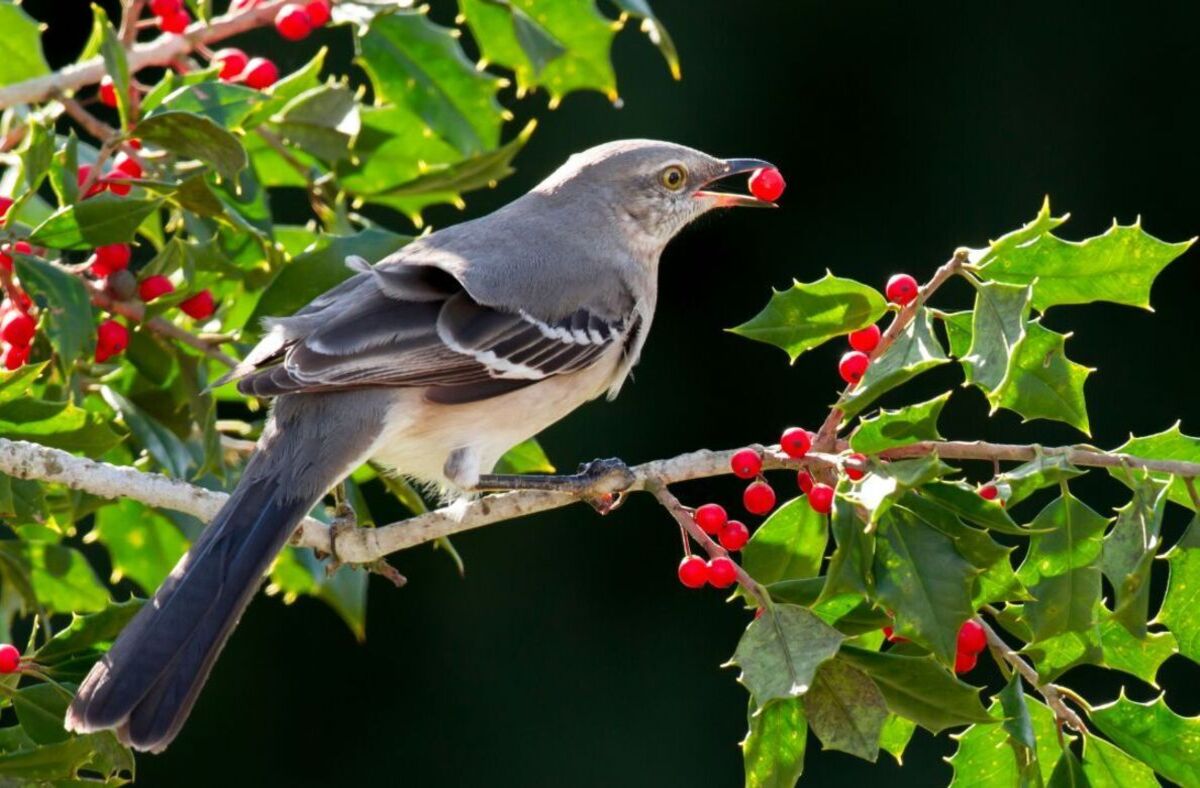 Do birds eat holly berries? The answer to this question is yes, backyard birds enjoy eating berries on holly plants.

Holly is a popular evergreen shrub that can be found in many parts of the world. The berries are safe for birds to consume and are high in antioxidants.

In this blog post, we will discuss what holly is, where it originated, if it is safe for birds to consume, and which backyard birds enjoy eating holly berries.

We’ll also explain why you, as a human bird lover, do not want to follow the example of your feathered friends when it comes to consuming holly berries!

What is a Holly Berry?

Christmas time wouldn’t be the same without a sprig or two of holly, would it? Those glossy, dark green leaves with their sharply pointed edges and red berries have become synonymous with the holiday season. But have you ever wondered where holly bushes come from, or what those berries are actually for?

Holly is a shrub that belongs to the Aquifoliaceae family, which also includes several other similar plants such as ivy and eucalyptus. Holly bushes can be found all over the world, but they’re most commonly associated with Europe, where they’ve been growing for centuries.

The name “holly” actually comes from the Old English word for “holy,” which is likely a reference to the fact that holly was often used as a decoration in churches during wintertime celebrations.

As for those bright red berries, they’re actually toxic to humans (though not to birds). The berries contain a substance called saponin, which can cause vomiting and diarrhea if ingested in large quantities. However, birds seem to be immune to saponin’s effects, which is why holly berries are an important part of their diet during the winter months.

The answer to this question is a little tricky, because it depends on the species of bird.

The sharp taste of the berry is a favorite among some species of birds, and they are attracted to the bright red color. Holly berries are also high in fat, which helps birds stay warm during the cold winter months.

While some people worry that holly berries are poisonous to birds, this is not the case. Birds are able to digest the berries without any problem, and they often return to the same bush year after year to enjoy the tasty treat.

Some birds, like cedar waxwings and American robins, love holly berries and will strip a bush clean in no time.

But one thing’s for sure – if you have a holly bush in your yard, you’re bound to see some feathered friends stopping by for a snack.

Many people are drawn to holly berries because of their bright red color and festive appearance. However, it’s important to remember that holly berries are poisonous to humans.

Eating just a few berries can cause drowsiness, dehydration, vomiting, and diarrhea.

So while they may be pretty to look at, it’s best to enjoy them from a distance. If you want to decorate your home with fresh holly branches, remove the berries before placing them, if you have young children or pets.

The dried berries can fall off of the branches to the floor and be found, consumed by pets or small children, and cause the issues mentioned above.

Holly berries are an important food source for many species of birds, and they play a vital role in the ecological balance of forest ecosystems.

When birds eat holly berries, they help disperse the plant’s seeds, which leads to new holly trees sprouting up. In addition, berries provide essential nutrients that help birds to survive and thrive.

Do Birds Roost in Holly Bushes?

Many birds prefer to roost in trees. However, holly bushes can make good roosting spots for some birds, especially during cold weather.

Holly bushes offer protection from the wind and elements, and their dense branches can provide a cozy place to nestle in for the night. If you’re interested in attracting birds to your yard, consider planting a few holly bushes. You just might find yourself with some feathered friends come wintertime!

The American Robin is a common sight in gardens and parks across North America. These cheerful birds are easily recognized by their bright red breast, and they are well-known for their love of holly berries.

In fact, the American Robin is one of the few bird species that are able to digest holly berries. This allows them to survive when other food sources are scarce. The American Robin is an important disperser of holly seeds, and they play a vital role in the health of holly populations.

Without these little birds, many holly plants would perish.

Blue jays are another of the bird species that eat holly berries. This makes them an important part of the holly ecosystem.

Holly berries are a key food source for blue jays, providing them with essential nutrients and energy. In turn, blue jays help to spread holly seeds through their droppings. This helps to ensure that holly trees continue to thrive in the wild.

Blue jays are also known for their striking plumage. Their vibrant blue feathers stand out in stark contrast to the dark green of holly leaves. This makes them a stunning addition to any winter landscape.

Bluebirds are a bird species that eat holly berries. As we know, holly berries are poisonous to humans. However, bluebirds have a higher tolerance for the chemical compound called saponin, which is what makes the berries poisonous.

Saponin is a detergent-like compound that can cause vomiting, diarrhea, and dehydration in humans. However, it does not appear to have the same effect on bluebirds. In fact, holly berries are an important part of their diet during the winter months.

The common blackbird is one of the many bird species that feast on holly berries during the winter months. While most birds eat primarily insects, the common blackbird’s diet consists mainly of fruits and berries.

In addition to eating holly berries, the common blackbird also feeds on other kinds of berries, such as juniper berries and elderberries.

The northern mockingbird is a bird species known to eat holly berries. The berries of the holly plant are poisonous to humans, but the mockingbird is immune to the toxins.

In fact, the mockingbird actually benefits from eating the berries, as they help to keep the bird’s digestive system clean and free of parasites. Additionally, the berries provide the mockingbird with a valuable source of nutrients.

As a result, the northern mockingbird is one of the few bird species that actually benefit from eating holly berries.

Woodpeckers are a species of bird that eat holly berries. The woodpecker uses its long beak to pierce the berry and then eat the inside. Holly berries are an important food source for woodpeckers because they contain a lot of nutrients.

Woodpeckers need these nutrients to survive and to reproduce. Some people think that woodpeckers are a nuisance because they eat berries that people want to use for decoration. However, woodpeckers play an important role in the ecosystem by eating holly berries.

So, you now know that there are some species of bird that really enjoy those bright red berries from holly bushes, particularly in the cold winter months.

We can appreciate that they find nutritional value as well as contribute to the propagation of the holly bush.

For us humans, we’ll enjoy those little berries from a distance!