Hummingbirds in Michigan: A Guide to the Species Found in the State

Are you familiar with “the mitten”, otherwise known as the state of Michigan? It’s the shape of the state that gives it that nickname, and aptly so.

Michigan is bordered by four of the five Great Lakes, and as a result, it is often referred to as the “Great Lake State.” In addition to its extensive shoreline, Michigan is home to many different types of landscapes, including forests, farmland, and rivers.

The state also has a diverse climate, with temperatures ranging from hot summers to cold winters. Michigan is a popular tourist destination for a variety of reasons. including beautiful terrain, an abundance of lakes, and beautiful natural forests.

Michigan is also known for its abundance of bird life. There are more than 450 different species of birds that can be found in the state, and the Wolverine state is one of the best places in the country to see hummingbirds.

And then there are the accidental visitors – species that rarely, if ever, appear in Michigan but have been spotted on a few occasions.

In this blog post, we will learn more about hummingbirds in Michigan, detailing which species are found here with regularity, and which are more unlikely to be seen.

Hummingbirds are fascinating little creatures. They’re the smallest birds in the world, averaging around 3 inches in length. And they’re not just tiny – they’re also incredibly fast, able to flap their wings up to 60 times per second!

Hummingbirds are found all across the Americas, from Alaska down to Chile. In the United States, they’re most common in the western states, although you can find them as far east as Maine.

Hummingbirds are beautiful birds, with iridescent feathers that shimmer in the sunlight. They’re usually brightly colored, with green, red, or purple plumage. And they’re not just pretty to look at – they’re also excellent flyers. Hummingbirds can hover in mid-air and even fly backwards!

When it comes to mating, male hummingbirds are very territorial and will often fight other males for access to a female. The female hummingbird does all the nesting and incubating of eggs – she usually lays two per clutch. Once the eggs hatch, the young hummingbirds stay with their mother for 4-6 weeks before venturing out on their own.

Hummingbirds eat mostly insects, but they also drink nectar from flowers. This makes them an important part of the pollination process. In fact, many flowers have evolved specifically to attract hummingbirds.

Hummingbirds face many predators throughout their lives. Snakes, spiders, lizards, and mice all pose a threat. But perhaps their most dangerous predator is the human being.

Every year, thousands of hummingbirds are killed by window collisions. Most of these accidents could be prevented simply by placing stickers on windows or hanging curtains over them.

They have determined that these hummingbird species are found regularly in the state of Michigan using the criteria above:

Let’s learn more about these beautiful species of birds!

Ruby-throated hummingbirds are a species of hummingbird that is found in Michigan. These birds are small, brightly colored, and have a very distinctive appearance.

The males have a bright red throat, which is why they are named ruby-throated. Males can be a bright, emerald green, and the females are mostly green with some white on their throats.

These birds are found in woods and gardens and often visit flowers to drink nectar. They are also known to eat insects.

Where might you spot ruby-throated hummingbirds in Michigan? They are most common in the southern and eastern parts of Michigan.

The territorial behavior of ruby-throated hummingbirds has been the subject of much debate among bird enthusiasts.

While some observers claim that these birds are highly territorial, others argue that they are more likely to share their territory with other hummingbirds. The truth is that the answer is not always clear-cut.

In some cases, ruby-throated hummingbirds will aggressively defend their territory against intruders. However, in other instances, they may seem to tolerate the presence of other hummingbirds.

Ultimately, the level of territoriality exhibited by a hummingbird depends on the individual bird and its surrounding social environment.

The tiny but feisty ruby-throated hummingbird is a common sight in Michigan during the summer months. But as the weather starts to cool, these little birds begin to vanish. So where do they go?

Most of these hummingbirds migrate for the winter. While some stay close to home and head south to Florida or Mexico, others travel all the way to Central America. That’s quite a journey for such a small bird!

However, there is a small population of hummingbirds that remain in southern Michigan throughout the year. These birds are able to find enough food during the winter months by feeding on insects and sap from trees.

So if you’re wondering where your Michigan hummingbirds have gone, now you know. They’re probably off enjoying the warmer weather – and getting ready for their long journey back home again come springtime.

Rufous Hummingbirds – a regular to a casual visitor to Michigan

Rufous hummingbirds are small songbirds that can sometimes be found in Michigan, about 3 inches in length and weighing less than a nickel.

It has a reddish brown body with a white breast, and its wings are tipped in rusty red. It is one of the most widespread hummingbirds, and it can be found in a variety of habitats. It is also one of the longest-lived hummingbirds, with a lifespan of up to 12 years.

The rufous hummingbird is known for its feisty temperament, and it is not afraid to chase away other birds that enter its territory.

Rufous hummingbirds feed primarily on nectar, but they will also eat small insects. In the spring and summer months, the rufous hummingbird breeds in open areas, such as meadows or fields.

In the spring, the male rufous hummingbird will perform an aerial courtship display, diving and swooping through the air to impress potential mates. These displays can be quite loud, and they often attract a crowd of spectators.

The female builds a small nest made of plant fibers and spider webs. She typically lays two eggs, which hatch after about two weeks. The young birds fledge after about three weeks, and they are independent soon after.

Although Rufous hummingbirds are not currently listed as endangered, their populations have declined in recent years due to habitat loss and other factors.

A casual, or less common visitor to Michigan is the Mexican Violetear.

The Mexican Violetear is a species of hummingbird that is native to Mexico, Central America, and Colombia. The bird is named for the violet patch of feathers on its ear, which is visible when the wings are open.

The Mexican Violetear is a small bird, with a body length of only 3-4 inches. The bird’s diet consists primarily of insects and nectar, which it obtains by hovering in front of flowers and using its long beak to reach the nectar.

The Mexican Violetear is a casual visitor to Michigan, seen occasionally in the spring and summer months. However, the bird is not considered to be resident in the state. Although the bird is not often seen in Michigan, it is a beautiful sight when it does appear.

Anna’s Hummingbirds are a species of hummingbird that is native to North America. This bird is named after Anna Massena, Duchess of Rivoli and wife of Napoleon Bonaparte.

The Anna’s Hummingbird is a small bird, with a length of 3-4 inches and a wingspan of 4-5 inches. This bird is green on its back and flanks, with a grayish-white belly.

Anna’s Hummingbirds have a long, straight bill, and the male bird has a rose-red throat. This hummingbird is an accidental visitor to Michigan, seen rarely. However, when it is seen in Michigan, it is usually in the southern part of the state.

Anna’s Hummingbirds feed on nectar from flowers and also eat insects and spiders. This hummingbird can hover in midair, and also fly backward and upside down.

Their long, thin beaks are perfectly adapted for sipping nectar from flowers, and they can beat their wings up to 80 times per second. These birds are native to the southwestern United States, but they are also occasionally seen in Michigan, infrequently enough to be considered accidental visitors to the state.

Due to the fact that they generally prefer dryer climates, Costa’s hummingbirds are not well-suited to Michigan’s winters. As a result, they are typically only seen in the state during the summer months.

Despite their small size, Costa’s hummingbirds are feisty birds, known for defending their feeding territories aggressively.

The Broad-billed Hummingbird is a species of hummingbird that is native to the southwestern United States and Mexico.

The Broad-billed Hummingbirds are an accidental visitor to Michigan, seen rarely. When it is seen in Michigan, it is usually in the southern part of the state.

The Broad-billed Hummingbird feeds on nectar from flowers and also eats insects. It nests in trees or shrubs, laying two eggs per clutch.

The Broad-billed Hummingbird is not currently considered to be at risk of extinction. However, habitat loss and degradation are potential threats to the species.

White-eared Hummingbirds are small birds that are mostly green with a white belly. The male has a green back and a white throat. The female usually has a brown back.

The White-eared Hummingbird can live in open woodlands, brushy areas, and mountain meadows near streams. It eats insects and nectar from flowers. It can often be seen chasing other hummingbirds away from its favorite flowers.

White-eared Hummingbirds are also one of the only hummingbird species that does not migrate. Some birds may move to lower elevations in winter, but most stay in their breeding territories year-round.

The Berylline Hummingbird is mostly green, with a white belly and red throat. It gets its name from the iridescent greenish-blue color of its feathers, which resembles the mineral beryl.

The Berylline Hummingbird is an important pollinator of many plant species, including agaves, cacti, and mango trees. It feeds primarily on nectar, but will also eat small insects for protein.

The Berylline Hummingbird is an accidental visitor to Michigan, seen rarely.

How to Attract Hummingbirds to Your Backyard

Hummingbirds are one of the most beloved backyard birds, and there are a number of ways to attract them to your yard.

One of the easiest ways is to plant native Michigan flowers that hummingbirds love, such as columbine, bee balm, and cardinal flower. They will enjoy the flower nectar that these flower species provide.

You can also set out hummingbird nectar feeders filled with sugar water; just be sure to clean them regularly and keep them away from other birds.

Another way to entice hummingbirds is to provide them with a source of water, such as a hummingbird birdbath. mister, or a small fountain.

By taking some simple steps, you can bring these delightful creatures to your backyard and enjoy their beauty all summer long.

Do you need a hummingbird feeder or perhaps a water source for these beautiful little creatures? 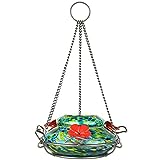 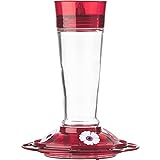 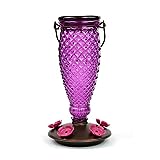 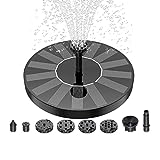 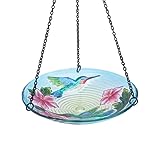 Hummingbirds are beautiful and fascinating creatures, and Michigan is lucky to have at least one species of these birds that can be attracted to a backyard habitat.

By planting the right flowers, setting out a feeder filled with sugar water, or providing a source of water, you can bring hummingbirds into your yard and enjoy their beauty all season long. 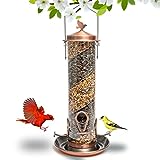 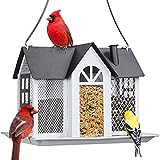 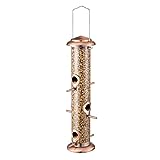 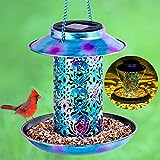