16 Types of Orange Belly Birds in the U.S. 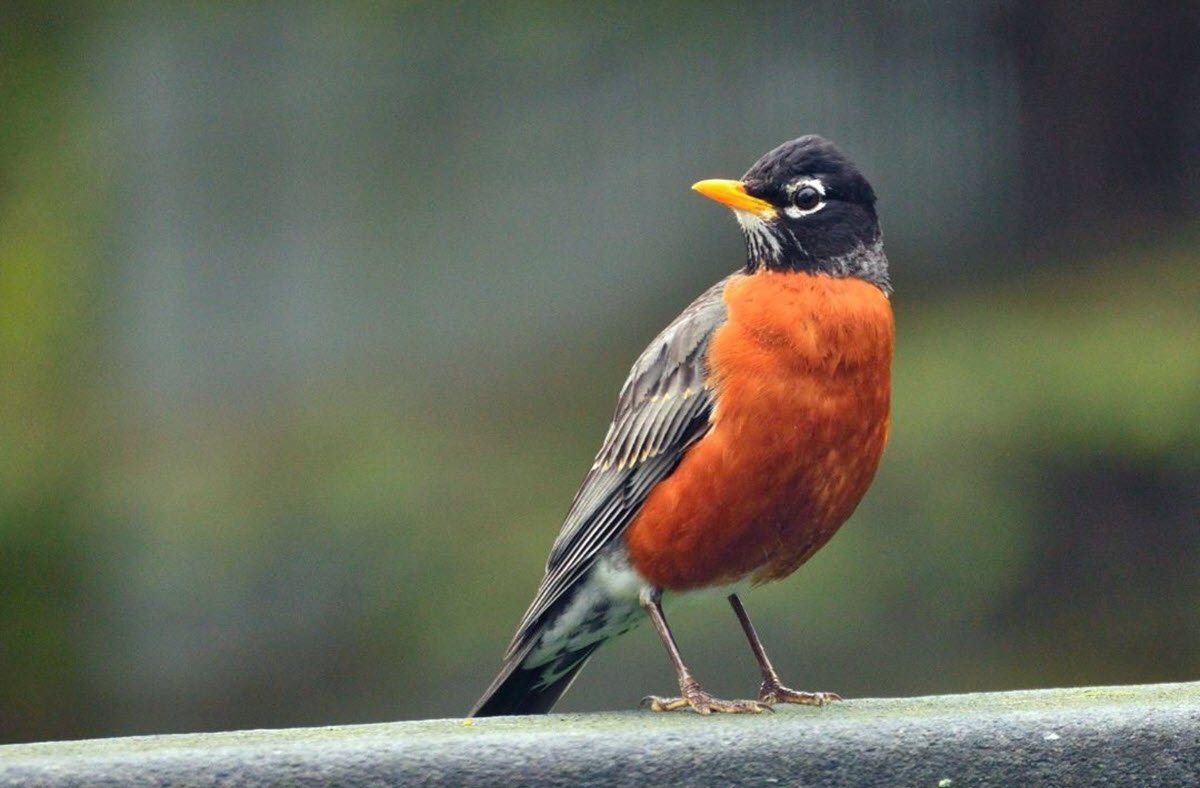 Most people love pretty birds but don’t know much about the different types that live in the United States.

There are so many beautiful types of birds in the United States, and while a few species are easily recognizable, there are others that are more difficult to identify.

For example, orange belly birds. Sure, you can spot them as they enjoy a meal at your bird feeder or splash around in the backyard birdbath, but what type of orange-breasted birds are they?

We’re here to change that! In this blog post, we will explore 16 types of birds with orange bellies from diverse parts of the country. Not only are they beautiful, but they each have their unique features depending on where they live.

What Types of Birds are Orange Belly Birds ?

There are a variety of orange-breasted bird species in the United States with orange bellies. However, these bright colors usually do not appear until their second or third year of life. Some of the most easily spotted types of orange belly birds include cardinals, blackbirds, orioles, and some species of hummingbirds.

Let’s look at these orange-bellied birds, one by one, in more detail.

The American robin has an orange breast that extends down to its legs. This large, chunky bird is easily recognized by its rust-colored breast and white chin. Many times their size is used to compare other birds. They’ll find their food – worms – by staring at the ground, motionless. Sometimes they will fight over worms that other robins have caught.

American robins can be found in these areas of the U.S.: All of the eastern United States; west to central Texas, southern Nebraska, and northern Georgia; also in parts of southern Canada.

An interesting fact about the American Robin is that it is the state bird of Michigan and Wisconsin.

Barn swallows are another type of bird with orange bellies that are easily spotted during the summer months. At first glance, it appears that the barn swallow has a solid orange belly, but it is actually several shades lighter than its brown-red chest.

The areas that barn swallows live in include: All of Canada and the U.S., excluding most of Florida, Hawaii, Louisiana, Mississippi, Oklahoma, Tennessee, some coastal areas in Texas, and northern Maine.

An interesting fact about the barn swallow is that it has a deeply forked tail, which makes it easier to identify.

The Baltimore oriole has bright orange plumage on their chest as well as their back and wings, which can be seen on adult males, along with white wing bars. Their bellies range from pale gold to bright, fire-engine red.

Females are not as brightly colored, with more of a yellow-colored belly.

Here are the areas where you can find Baltimore orioles: All of Maryland, south through Virginia and North Carolina; west across the southern parts of Ohio, Indiana, and Illinois, and south through Oklahoma and Texas.

An interesting fact about the Baltimore oriole is that these bright birds are easy to spot flitting around flowers in groups, where they seek out nectar and insects.

American goldfinches can be found in the following areas: Much of North America, including Canada and parts of Mexico; also Alaska, most of Hawaii, and some coastal regions along the Gulf of Mexico.

An interesting fact about American goldfinch is that they eat thistle seeds as well as sunflower seeds, and they can be found flitting around in large groups.

The Bullock’s oriole is a songbird with a solid orange belly, and the rest of its body is all yellow. Males and females look alike, although males are usually bright in color than females. You’ll notice the females as they build their hanging nests, sometimes dangling upside down.

Here are the areas where you can find this type of bird: During breeding season they can be found in the western half of the United States. They winter in Central and South America.

An interesting fact about Bullock’s oriole is that it is named after William Bullock, who discovered it in 1784.

Spotted towhees are another type of bird with orange bellies. This species can be identified by its white underparts, and rust color spots on its wings.

Here are the areas where you can find spotted towhees: The western parts of the United States; also in southern Canada.

An interesting fact about this small, chunky bird is that it sings loudly, with a sound similar to a cat’s meow.

The Western bluebird is a beautiful bird with an orange belly and a deep blue head and wings. Females are duller in color, with more of pale orange color on their breast.

Here are the areas where you can find the western bluebird: Western United States; north to British Columbia and eastern Washington and Oregon; south to Baja California, New Mexico, Texas, and Oklahoma.

An interesting fact about the western bluebird is that it eats insects, spiders, and fruit.

This beautiful bird, also called the sparrow hawk, has a soft orange belly and lovely blue-gray wings. The American kestrel is one of the smallest types of birds with orange bellies, reaching no more than 14 inches in height.

The American kestrel is found throughout the southern half of Canada and all of the U.S., excluding western Oregon, Washington state west of the Cascade Mountains, California south of the Sierra Nevada range, New Mexico, Texas, Florida, and parts of Georgia.

An interesting fact about the American kestrel is that it eats mostly insects and small rodents.

The male Rufous hummingbirds have gorgeous, orangish-red bellies. It’s not only the color of their bellies that makes them stand out; they also have shimmering green feathers on their backs and heads, and white spots near the tips of their tails.

This type of bird can be found in the western U.S., south through Mexico, and north to southern British Columbia in Canada.

An interesting fact about the rufous hummingbird is that it can fly at speeds of up to 30 miles per hour, and its wings beat around 80 times every second.

The red-breasted nuthatch is a type of bird with an orange belly that spends the winter months in the Eastern and Central U.S.

This species can be difficult to spot because they spend most of their time on tree trunks, but you’ll know you’ve spotted one when you see their grayish-blue head and back, orange belly, and white underside.

An interesting fact about this bird is that it can go upside down on tree trunks to find food, which helps them survive during the winter months.

Unlike its cousin the western tanager, the male scarlet tanager has a much more vibrant orange belly and black wings. Females have darker wings and more of a yellow-green body.

The scarlet tanager can be found in eastern North America, as well as scattered populations throughout central and eastern U.S. states such as Ohio, Kentucky, Indiana, Illinois, Missouri, Kansas, Oklahoma, Texas, and Louisiana.

Interestingly, the call of the scarlet tanager sounds very much like a robin.

The Eastern bluebird is another type of bird with an orange belly that might look familiar. Like the western bluebird, it appears as if this species has orange wings when in fact those are just their rump feathers.

This beautiful songbird can be found throughout much of North America east of the Rockies, except for New England and southeast Canada.

An interesting fact about the eastern bluebird is that it eats insects, berries, and especially loves to feed on grasshoppers.

The Eastern kingbird is a type of bird with an orange belly that can be found throughout North America east of the Rockies, including much of Canada and the northern U.S. west of the Mississippi River, except for Minnesota and Wisconsin.

This beautiful species has a black head, beak, and throat, while their abdomen is an attractive orange color.

Interestingly, the eastern kingbird is the only species of kingbird that uses its beak to snap its prey before eating it.

The Allen’s hummingbird is another type of bird with an orange belly that you’ll find on the U.S. west coast, specifically Southern California through to northern Mexico and parts of Texas.

This tiny (4-inch) species has a green back, head, and tail; gray wings; and an orange abdomen.

An interesting fact about Allen’s hummingbird is that it can reach speeds of 35 miles per hour!

Black-headed grosbeaks are another type of bird with an orange belly that you’ll find in the forest of Western North America, but only east of the Rockies, primarily throughout Colorado and New Mexico.

This species has a grayish-brown head, chestnut-colored wings, and a soft orange belly.

An interesting fact about the black-headed grosbeak is that both male and female incubate their eggs equally as well as feed their babies.

The Say’s phoebe is a type of bird with an orange belly that you can find in the southwestern U.S., Mexico, and parts of Central America.

Males and females alike have grayish-brown backs and outer wing feathers (with some blue spotting), while their chests are lighter with soft orange bellies.

Interestingly, they feed only on insects, and unlike most other birds they will reuse their nests from year to year.

If you live in the United States, there’s a good chance that an orange belly bird lives near you. Whether they’re scarlet tanagers or eastern bluebirds, these birds are beautiful and diverse creatures with interesting characteristics depending on where they live. Hopefully, this article has opened your eyes to some of the more common species of birds with orange bellies from different regions across America.