When Do You Take Down Hummingbird Feeders? 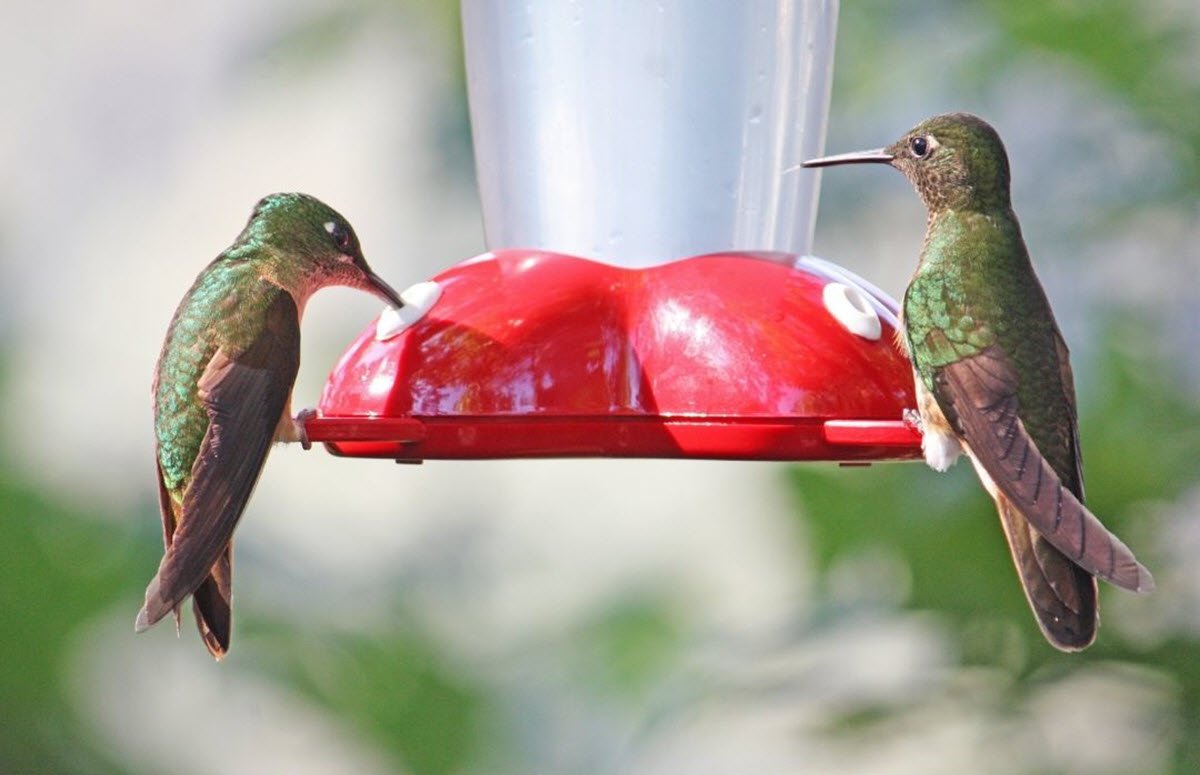 For bird lovers, the opportunity to watch their feathered friends and help care for the wild birds is more than a pastime, it’s a commitment. If the bird feeders in your backyard include those for the tiny hummingbirds, you might be wondering, when do you take down hummingbird feeders?

That’s a legitimate question, my friend. As lovers of the tiny birds, know when to put out the hummingbird feeder as well as when to bring it in are important considerations.

When the days grow shorter, many people are prompted to take down their bird feeder and stop feeding hummingbirds. Even though hummingbirds migrate south in the autumn, you shouldn’t have to worry about removing feeders until later in fall or early winter.

The tiny migratory birds need the hummingbird sugar water while they are migrating and again once they arrive at their winter locations.

Every fall, many North American hummingbirds will migrate south toward their wintering locations. The length and location of the migration routes vary by species, but most are very long journeys. Rufous Hummingbirds have one of the longest migrations with a round-trip distance of nearly 2,000 miles.

In the East, the migrating birds begin their southward journey as early as July or August, but most species migrate between September and November. The last sightings in northern states are usually during the first half of December when the cold weather arrives, with a few lingering until January or February.

In Mexico and Central America, the return migration typically occurs from February to April but can be as late as June.

Migrating hummingbirds leave their Canadian and northern U.S. breeding grounds for a number of reasons, including a lack of food during winter months and because they prefer the milder climates further south.

You can identify the type of hummingbird you’ll most likely find in your area of the United States.

When Do You Take Down Hummingbird Feeders?

If you live in a climate that sees a colder winter, your hummingbirds will most likely migrate to a warmer climate during those months.

In general, you want to wait at least two weeks AFTER you’ve seen the last hummingbird at your feeder before you take your feeders in for the winter.

In many locations, this will be sometime in mid-September, mid-October, or early November. There could be some stragglers that remain in your area or hummingbirds on their migratory flight that need nourishment.

For this reason, be sure to change the nectar every three to four days in your hummingbird feeder so it will be fresh and won’t become stale or even make them sick.

Once you become familiar with the migratory patterns in your area, you’ll know when to pay extra close attention to keeping the nectar in the feeders full.

As the hummers are preparing for their migratory journey, the little hummingbirds eat more and increase their weight from 25 to 50 percent in preparation for the long flight.

And, just in case you’re worried that by leaving your hummingbird feeder out you’ll prevent the hummers from beginning their migration, you can rest assured. They know when it’s time to head south…feeders or no feeders!

Feeding Hummingbirds in the Winter

If you live in an area of the country where Anna’s hummingbirds live, your hummingbird feeder’s sugar water can provide nourishment for these tiny birds throughout the entire winter, if you continue filling it with nectar.

Don’t worry about the hummers migrating south—Anna’s are year-round residents in Southern California and parts of Arizona.

If you would like to continue feeding your hummingbirds during the colder months of the year, you can even store your feeders in an unheated garage or shed. Be sure to bring them back inside if freezing temperatures are predicted.

Hummingbirds need the energy that hummingbird nectar provides when they resume their northward journey in the spring. If you keep your feeder up throughout winter and provide lots of healthy food for your tiny visitors, their chances of survival will be much better.

You could consider a hummingbird feeder heater as well:

You may also consider creating a “hummingbird oasis” in your backyard or garden by planting some of their favorite flowers and plants such as bee balm, cardinal flower, columbine, hummingbird sage, turtlehead, and trumpet vine.

Do you leave hummingbird feeders out all year?

Do hummingbirds still feed in the winter?

Yes, some hummingbirds will come to nectar feeders in the winter months and can thrive in the cold weather. They may return to the same feeding area year after year, too.

If you feed hummingbirds in the winter, be sure to use a classic recipe for nectar, with 1 part sugar to 4 parts water.

When do you take down hummingbird feeders?

There’s no set date, but it will depend on where you live and the migratory patterns of your local population of hummers. You should continue to refill the feeders until two weeks after the last bird has stopped visiting your feeder.

Should you stop feeding hummingbirds so they will migrate?

No, it’s best not to stop feeding hummingbirds during fall migration. You should continue to feed them until two weeks after the last hummer has stopped visiting your feeder.

If you take down your feeders too soon, there may be stragglers that run out of food before they can fly south. By continuing to leave feeders with their sugar water out for a few more weeks, you’ll be able to help any stragglers that remain in your area.

When do hummingbirds return to my yard?

Most hummingbird species will start migrating back north around February or March, but there are some species like the Rufous Hummingbird whose migration isn’t complete until June.

Migration is a systematic movement from one location to another location, usually by a group or type of animal, to breed or forage. Some hummingbirds migrate thousands of miles every year. The most popular explanation for hummingbirds migrating so far is the lack of food sources during wthe inter months.

Climate, temperature, and lack of food are all factors that trigger hummingbirds to begin the long journey south. Cooler temperatures will start a hummingbird’s migratory journey and they will continue migrating as the temperatures drop.

If there is a lack of food during those months, then this will also trigger them to migrate south. Hummingbirds have been known to start their migration as early as mid-July!

How far do hummingbirds migrate?

A Rufous Hummingbird was tracked flying over 9,000 miles from Southern California to feed on the flower nectar of a plant in Costa Rica! Some other species of hummers will fly so far south for the winter that you won’t see them again until the following year.

How long does it take for hummingbirds to migrate?

A hummingbird’s average migration is about 500 miles, but some have been recorded flying more than 1,000 miles at a time. It all depends on the species of hummingbird and their location.

Conclusion: When Should Hummingbird Feeders Be Taken Down?

When it’s time to take down your hummingbird feeder, make sure you stop refilling the nectar two weeks after the last bird has stopped visiting. Also, consider leaving out your feeder for two or three more weeks if you live in an area where cold weather is unlikely.

Remember that climate, temperature, and food are all factors that trigger hummingbirds to begin migrating. It takes an average of 500 miles for a hummingbird to migrate, but some will travel up to 9,000 miles!

If you live in a warmer climate then you’ll be able to leave your hummingbird feeder up all year round.