Where Do Hummingbirds Sleep? 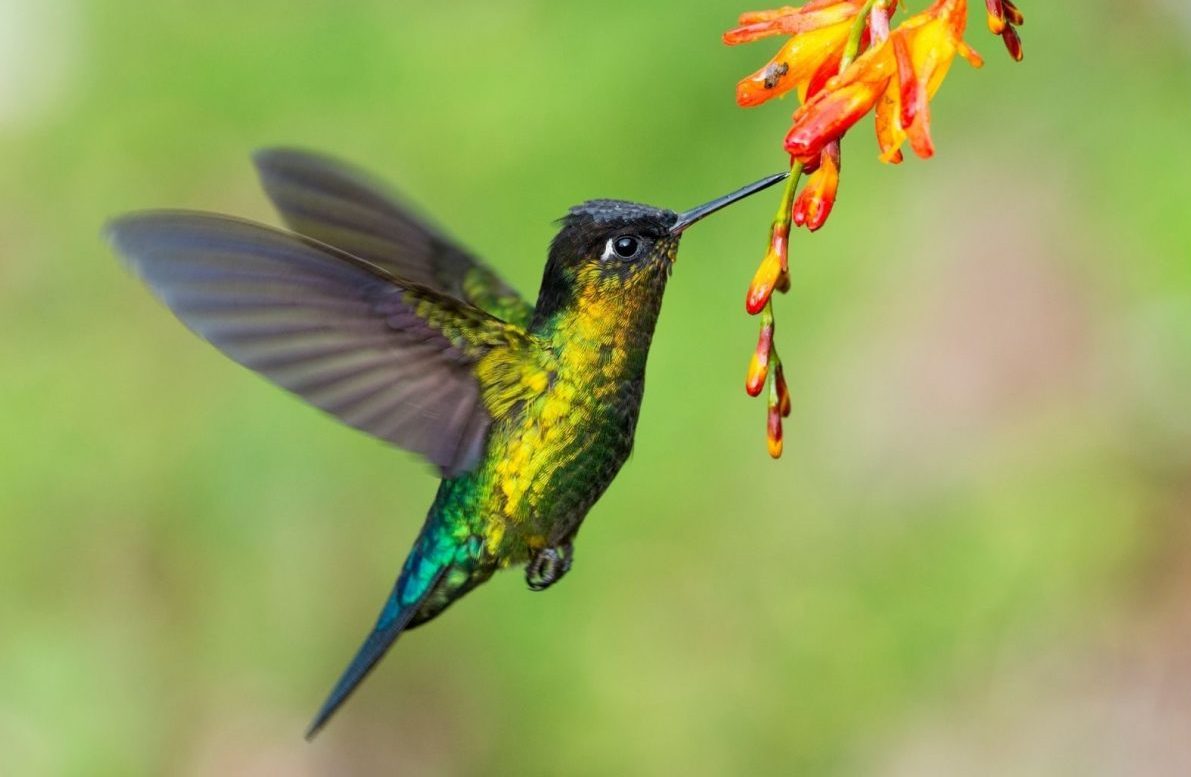 The Hummingbird is a tiny, brightly colored bird that may be found throughout the Americas from Alaska south to Tierra del Fuego, with the majority of these little creatures living in the tropics.

Hummingbirds are beautiful little creatures that are exciting to watch. They move so quickly and elegantly from feeder to flowers, searching out the flower nectar and insects that they love to eat.

It takes a lot of energy for them to flap their wings at such a high rate, 60 to 80 times per second (thus the name, hummingbird, because their wings make a humming sound), so hummingbirds eat constantly in order to stay alive, several times per hour in fact, and can eat up to three times their body weight. It would be like a human eating an entire refrigerator full of food!

Hummingbirds hover while they eat, so even during feeding they are using up energy, and a lot of it! Their heartbeat can be up to 1200 times per minute.

These little birds have a unique system for quieting their bodies down for rest in order to regain the energy to do the same thing over again the next day. Their goal? To survive yet another day.

But where do hummingbirds sleep at night, and how do they sleep? Let’s take a closer look.

Hummingbirds don’t sleep in the traditional sense. They enter a state called hummingbird torpor,  or noctivation. And, hummingbirds do not sleep during the day.

When a hummingbird goes into torpor, it is a deep sleep. It’s like a cross between sleeping, being in a coma, and hibernation.

Torpor slows their metabolism right down so they use up less energy during the night, and also reduces their body temperature.

This also helps hummingbirds stay alive, because they are so tiny. It is part of their survival.

They’ll start preparing for their night’s sleep at dusk, and they’ve figured out a method of sleeping that gives them the best rest while using the least amount of energy.

While they are in a state of hummingbird torpor, this slows right down to just 50 beats per minute and it will almost look like they have stopped breathing altogether! Their metabolism can drop to just one fifteenth of its normal rate, and this can help them to save up to 60% of their energy.

The tiny hummingbirds are conserving energy, and to do so they shut down their whole system.

Their feathers fluff out to the greatest extent possible, and they resemble cotton balls with beaks pointing sharply upward.

If you see a hummingbird in torpor, you may think that they are dead! They look really still and it can be difficult to tell whether they’re alive or not.

In fact, they might hang upside down. Some experts believe that this is due to their condition of hummingbird torpor, which causes them to have difficulties preserving their balance while perched on top of a limb.

Just leave them alone and don’t touch them.

When do hummingbirds enter a state of torpor?

Hummingbirds will go into a state of torpor from dusk until dawn. The length of torpor can last anywhere from eight to sixteen hours.

The species of hummingbird also has an impact on how long they remain in torpor.

The rising of the sun will trigger the hummingbird’s hormones and they will begin to wake up. Because their metabolism is so slow during this time, it takes them from 20 minutes to up to an hour to fully wake up from this state.

Hummingbirds increase their heart and breathing rates while they vibrate their wing muscles during this time of arousal from torpor. Vibrating muscles produce heat, which warms the blood supply.

The hummingbird’s body warms up by several degrees every minute as a result of shivering, and he awakens with enough energy reserves to see him through to his first feed.

How Long Before Birds Come to a New Feeder

Where Do Hummingbirds Sleep?

They find safe spots on tree branches to hide away while they rest. They search for trees with large leaves to help keep them hidden from view, particularly from predators.

Hummingbirds prefer broadleaf trees like oak, birch, or poplar to evergreens like pine. These trees frequently have a lot of branches and leaves, providing many safe places for the hummingbirds to rest.

The hummingbird’s feet are so tiny that they perch on small branches or tree twigs. Their power is in their wings and beaks, not their legs.

Hummingbirds dislike sleeping in confined places, so they aren’t attracted to birdhouses and rarely nest near your house.

They tend to build their nests in these same locations where they prefer to sleep, and often like to find spots where the branches fork.

Hummingbird nests are difficult to find because they are tiny, well-camouflaged, and located deep within the trees.

If the hummingbird is a female, she sit and sleep on the nest to defend her babies from predators or other dangers that may enter their territory while they’re away foraging.

Do hummingbirds sleep together?

Hummingbirds tend to sleep alone as they are solitary creatures.

They do not need to share body heat because they go into a state of torpor to sleep.   Several hummingbirds may sleep in the same tree or shrub, and on occasion even on the same branch. They’ll be more spaced out in these locations rather than huddling together, as other bird species do.

When they migrate, they don’t form flocks like other birds.

What Are the 7 Life Cycles of a Bird?

How Do Hummingbirds Migrate?

Hummingbirds are thought to be able to detect changes in daylight duration and the availability of nectar, flowers, and food. Instinct also has a role in influencing whether or not to migrate.

When they do migrate, they fly alone, and don’t go very high off of the ground.

A hummingbird’s heart beats up to 1,260 times a minute during migration, and its wings flap 15 to 80 times a second. A hummingbird will usually gain 25-40% of their body weight before they begin migrating in order to make the long trek over land and water in order to support this high energy level.

Hummingbirds prefer to fly during the day when nectar sources, such as flowers, are visible. The birds can see and stop over food supplies on their way by flying low. They’re also accomplished at utilizing tail winds to help them travel faster while using less energy and body fat.

To maintain this high level of activity, a hummingbird will typically gain 25-40% of their body weight before flying across land and water to begin migration.

Hummingbirds can travel as many as 23 miles in one day! In fact, the species that make the trek from Florida to the Yucatan, which is 500 miles, do it non-stop, depending on the wind conditions. They truly are amazing little birds!

Where do hummingbirds sleep during migration?

If they are flying over land, hummingbirds will stop at night to sleep. Their pattern is to fly by day and sleep at night when possible.

If flying over waters like the Gulf of Mexico, the hummingbird must keep going. They don’t have a choice.

Hummingbirds are such beautiful, unique, and tiny creatures.

They typically sleep from dusk until dawn, hidden away in tree branches for safety and security as well as protection from the elements. They have a remarkable ability to survive, utilizing the energy-saving state of torpor to help them rejuvenate during the night and prepare for the day ahead.

So, the next time you see a hummingbird, think not only of its beauty, but also of its tenacity, and its will to survive.